A unique working estate in Royston, part of National Trust

Hello! Welcome back! Apologies for the lack of posts over the past few weeks - we finally came down with the "English cold" which as we were told, usually strikes around the six month mark following your arrival and lingers for several weeks. I would say that is an accurate timeline for sure.

So, in this week's post, I'm going to summarize our trip to Wimpole Estate in Royston. I have wanted to go to Wimpole for a while now. Wimpole, as well as many other sites here, are National Trust properties. National Trust was founded in 1895 as a charity to preserve and protect dozens of properties, and sites throughout England, Wales and Northern Ireland. The Trust also includes conservation. The National Trust oversees: "780 miles of coastline, over 248,000 hectares of land, over 500 historic houses, castles, ancient monuments gardens and parks and nature reserves, and finally, close to one million objects and works of art," according to its website. We signed up for a membership, which is pretty reasonably priced (you can usually recoup your membership costs after visiting three or so sites and you get free parking at most sites). There is another similar yearly membership, English Heritage. English Heritage overseas "over 400 historic monuments, buildings and places - from world-famous prehistoric sites to grand medieval castles, from Roman forts on the edges of an empire to a Cold War bunker," according to its website. We chose National Trust because most people here we have talked to have that one, while some have both. We do plan to get an English Heritage membership at some point, but we went with the National Trust because it has more parks and gardens, and more properties. I've included links below to both, if anyone has an interest in looking at what each has to offer as far as properties and sites.

Wimpole Estate encompasses the property and the Hall, which we would call the house. Wimpole took ten years to build, begun in 1640 and completed in 1650. It is considered a "country house" located in Cambridgeshire (fun fact the "-shire" that the end of words here is pronounced "sheer" don't say "shire" as you will get some looks here...speaking from experience). Ownership has passed through many important hands over the years, including: Sirs, Earls, a Duke, a Baron, a Lord, and a Viscount. The final owners were Captain George Bambridge and his wife, Elsie Bambridge. Elsie Bambridge was the only surviving child of Rudyard Kipling, who was awarded The Nobel Prize in Literature in 1907. The Bambridges then bequeathed the estate to the National Trust in 1976. Queen Victoria and Prince Albert visited the Hall in 1843. There is a portrait of Queen Victoria above the fireplace in the Grand Dining Room, which she reportedly said was a " a perfect likeness" of herself.

We went on a self-guided tour of the Hall which consisted of two stories plus the basement area. We began in the Entrance Hall, followed by the Ante-Chapel, the Inner Hall, and the Saloon. The Saloon was a fantastic room with big bay windows to view the gardens and landscape behind the Hall. I could definitely see myself sitting in this room taking my coffee and reading a morning paper while staring out into the gardens. The Yellow Drawing Room was next and did not disappoint, probably one of my favorite rooms. It was built for entertaining and has a unique shape and decor to it, yellow fabric-lined walls. Queen Victoria and Prince Albert reportedly enjoyed this room during their visit and the Queen supposedly wore a yellow bird of paradise silk dress which would have matched the room's decor. We then went through the Red Drawing Room, the Book Room, Library, Long Gallery, South Drawing Room, Ante-Room and the Breakfast Room. Rounding out the first floor were the Grand Dining Room and Grand Staircase. Mrs. Bambridge had converted the Grand Dining Room into a kitchen which consisted of three rooms and a corridor. The National Trust converted this room back into a dining space in 1990 to reflect the room's original purpose. We reached the second floor via the Grand Staircase, and were led into the Lord Chancellor's Bedroom. There is a rather gaudy and ornate red and gold bed in this room, an eighteenth century state bed is what the placard said, which happens to be an elaborately decorated or carved bed...go figure. Next, we went into the Lord Chancellor's Dressing room, which had a smaller twin-sized bed in it. We then came to the Vestibule which led into Mrs. Bambridge's Study, a small little room where Mrs. Bambridge could view the front of the house. The Study led into Mrs. Bambridge's Bedroom, she definitely had a thing for pink and chintz. Right outside of her bedroom, was the Print Room which contained some of Captain Bambridge's collection of prints, but Mrs. Bambridge converted the Print Room into a bathroom suite in 1958 and installed a pink toilet, which is the first thing you see as you walk into the room. Next, it was downstairs to the basement. Here we saw the Bath House. This was interesting because it was designed in 1793 by John Soane and was reportedly used for health benefits, rather than cleanliness and could hold almost 3,000 gallons of water! Apparently group bathing was a thing, not sure I understand the health benefits of that. It kind of reminded me of a very large and deep hot tub in its own room. We then went into The Chapel which was used by both the families who owned the Hall and the servants. It was beautiful. The interior was painted in the 1720s by James Thornhill who used "trompe l'oeil" (trick of the eye), which is a painting technique that uses realistic imagery to create an optical illusion, making objects appear three dimensional. The paintings and the ceiling were beautiful and so interesting, I suspect the "trompe l'oeil" helped with that. We then walked the corridor to the Housekeeper's Room, Butler's Pantry and Steward's Room. The Housekeeper's room was quite large, we were quite surprised by the size of the room actually, compared to that of Mrs. Hughes, the housekeeper in Downton Abbey (a good comparison for all of the Downton Abbey fans). We exited the Hall and walked around the gardens. Much to my dismay, Capability Brown also left his mark on the gardens here (he left his mark at Kimbolton). The day we visited, the weather was rainy and windy, typical English weather, so we didn't get a lot of pictures. 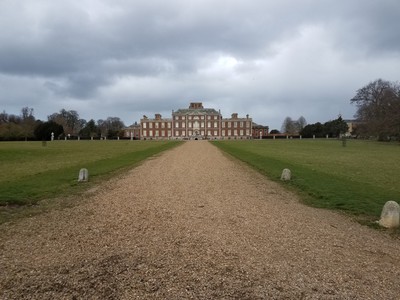 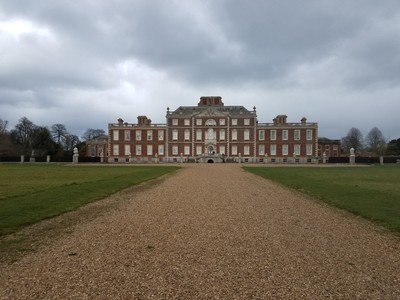 View with your back to the Hall 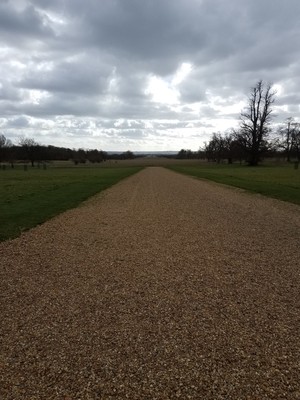 Church next to the Hall, I believe still in use 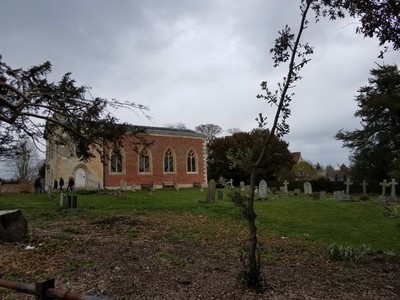 Back of the Hall 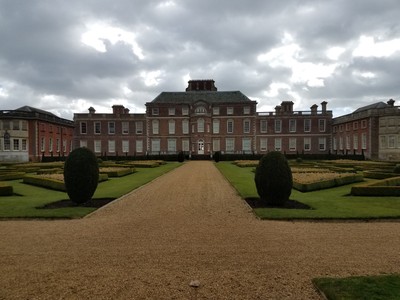 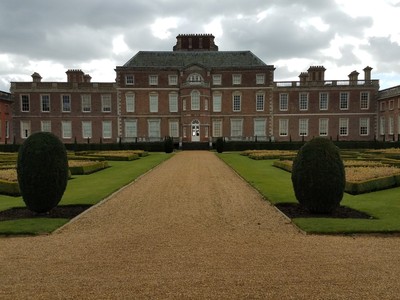 Gardens in the back of the Hall 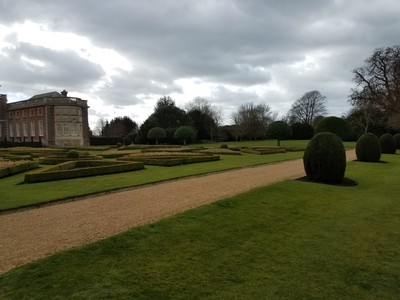 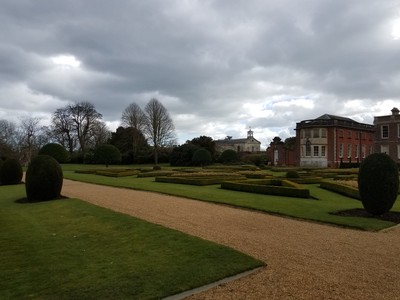 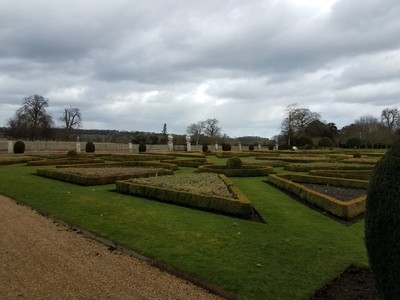 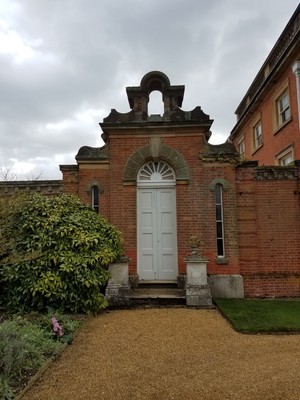 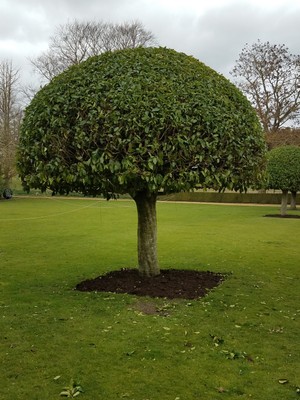 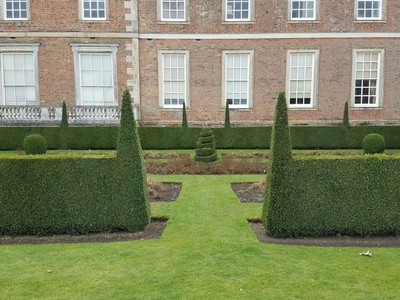 Ruins viewed from the back of the Hall 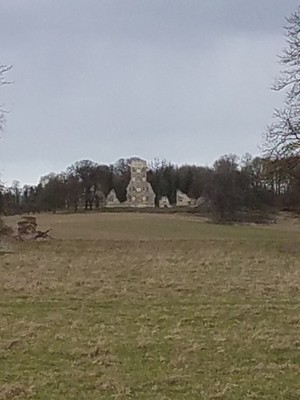 Wimpole Hall was a lovely house. There is also a working farm on the property that we will have to visit next time.

Onto the next adventure...Poland and Slovakia!

Previous Next Table of contents

Don’t feel bad about the “shire” vs “sheer” thing, especially in a country that pronounces “Leicester” as “Lester,” and “aluminum” as “all-You-minimum.” Who knew?

Comments on this blog entry are now closed to non-Travellerspoint members. You can still leave a comment if you are a member of Travellerspoint.

If you aren't a member of Travellerspoint yet, you can join for free.